It’s that time of year

Now that the morning temperatures are in the 40's it says fall is coming and it's time to start thinking about what ornament I will make our daughter this year. I've been making her an ornament for Christmas every year since she was born in 1989. You can see all of them here.
https://chrissquiltinguniverse.blogspot.com/p/cloth-ornaments.html
Initially I made them from patterns from the major pattern companies like McCalls, Butterick, and Simplicity. That would be a logical choice since I sewed clothing for most of my adult life from patterns from those companies. Eventually the patterns from these companies became felt and glue ornaments. I guess that was to cater to the non sewing crowd. That certainly did not work for me. I found a set of patterns for dogs and cats that I made for years. The internet provided plenty of ideas for ornaments. In 2006 I started making my own patterns for ornaments. The first one I made was Jack from Nightmare Before Christmas.

I have pretty much made original ornaments ever since then. They have been characters from movies like Star Wars or something from our travel that year. Last year was Baby Yoda wearing a mask to remember the pandemic. 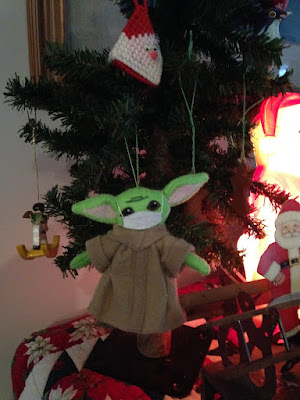 So what am I thinking about this year? I already have an extra body left over from making Outlander ornaments (Jamie and Claire) for my girlfriend Ellie back in February. 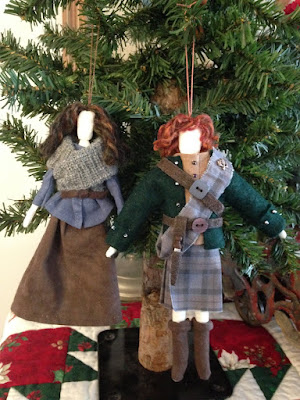 I would hate a spare body to go to waste! So I'm thinking of making her the Pink Power Ranger. Our daughter was into the Power Rangers TV show when she was young. In fact I made her a costume one Halloween that was the pink Power Ranger. I wonder if her boyfriend was into the Power Rangers and whether I should make a blue one as well. Of course how do I ask her if he was without giving it away?
Here's what the pink Power Ranger looks like.
https://turtlepedia.fandom.com/wiki/Kimberly_Hart
I usually start working on the ornament after Thanksgiving, but this year I might have to start earlier since we will probably visit her in mid November. It would be good to give the ornament to her instead of shipping it through the mail. I always worry it will get lost. Of course maybe we will be able to see her at Christmas this year which did not happen last year.
When we visit in mid November she will be in her new house. They finally managed to get a house in this crazy housing market. It's a 1770 house in Salem, Ma. It has tons of character and I'm hoping she will want some of our antiques to decorate it with.
https://www.realtor.com/realestateandhomes-detail/178-Federal-St_Salem_MA_01970_M40517-29493
Linking to Nina-Marie.
http://ninamariesayre.blogspot.com
Thanks for reading. I have nothing to show on the Boston quilt. Fabrics have arrived and I've made some decisions, but not much has been accomplished. Maybe I will have more to show next week.
Chris
Just added. I am one of the featured fiber artists in the latest edition of a local art magazine.
Posted by Chris at 8:12 AM 1 comment:

A week of decisions

I thought I had the brownstones figured out, but no matter what fabrics I tried nothing seemed to work. This is the stage when the buildings just look like a big blob of fabric. I know that adding different fabrics for the various buildings and windows that make up the row of brownstones will help, but I pretty much spent the week stuck. I have certainly been down this road before….the struggle with picking the right fabrics. 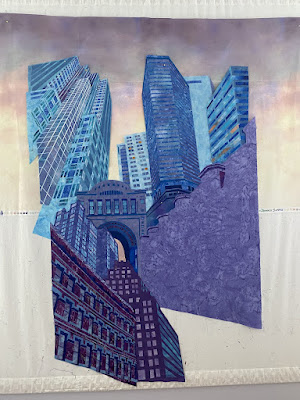 I played with the photo on my iPad to see if any inspiration would come from that. I think I arrived at what might work. Of course the solution requires me to buy some more fabric!! I mainly have blue purples in my stash. The solution would require more red purples. I do have some red purples, but they are too dark. So I ordered some lava batiks from 1000 bolts and one nut. Plus I went to the local quilt store and she is ordering a red purple batik for me. So now I wait. We are going away for a few days so I won't feel bad about not working on the quilt. I think meanwhile I will clean up the sewing room again and pick some fabrics for the next set of buildings.
So what do I think the solution is? Using both red and blue purples for this set of buildings. The roof lines of the buildings will be blue purple and the lower part of the buildings will be red purple with blue purple features like windows and stairs. I know from a color class with Elizabeth Barton that it's more dynamic to mix warm purples (red purples) with cool purples (blue purples). Since my favorite color is blue it's not surprising that my stash is filled with the cool purples rather than the warm ones.  I hope this is the solution. It will certainly bridge the blues of the skyscrapers with the darker plum purples below the brownstones. At the very least I will have a lot more red purples in my stash for future quilts. I might have to make some of the brownstones blue purple with red purple windows. I won't know until I get the new fabrics and start to cut them. 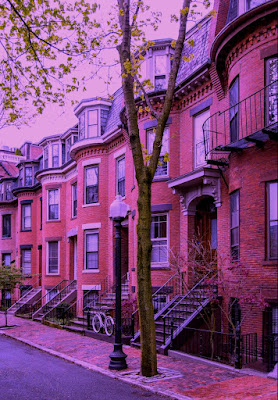 Any thoughts? Linking to Nina-Marie.
http://ninamariesayre.blogspot.com
Thanks for reading.
Chris
Posted by Chris at 6:51 AM No comments:

I managed to get the full scale photo of the brownstones that fall directly below the skyscrapers on the right printed out. You can see how large this set of buildings will be and all the detail they will have. 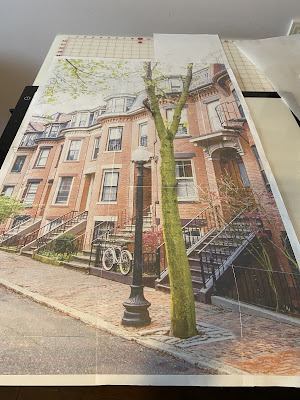 I also had to draw in features that are hidden in the image behind the tree. Also I decided to simplify the tops of some of the buildings. 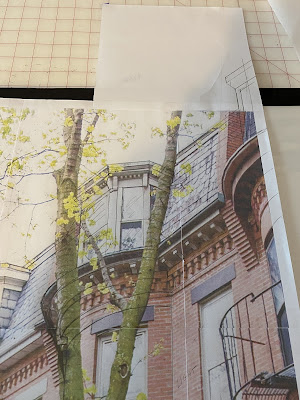 I’ve chosen the base color for these buildings. I will be adding dark and light features on top of this medium shade of purple. Plus it was one of the few pieces that I had that was large enough! This is a tricky business finding a fabric that reads darker than the buildings above, but will be lighter than the buildings below.   Of course the other fabrics that I add to the brownstones will affect that as well. Today I will finalize that choice since now that I’ve seen the photo I am second guessing my choice. Will go through my stash to see if anything else has potential. 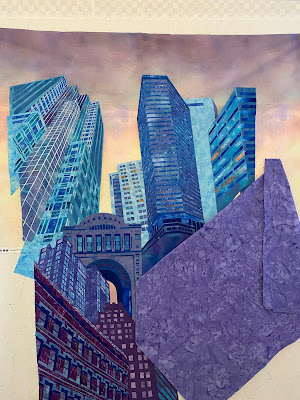 Linking to Nina-Marie.
http://ninamariesayre.blogspot.com
Thanks for reading.
Chris
Posted by Chris at 8:46 AM No comments:

I completed a video interview with Liana Voia for Multiple Arts this week about my art quilting.  You can see the interview here if you are interested.
https://vimeo.com/585753714
It includes photos of my work from the beginning of my quilting journey as well as some of the paintings I did before I even got hooked on quilting. The photos also include images of my husband, daughter, my parents, and several friends. The interview is pretty long at 50 minutes. It came out much better than I was expecting.
The video also shows my one and only successful water color painting.
I mention several artists that I love in the video.
Elizabeth Barton who I have taken lots of classes from including 2 master classes.
Here is a link to her blog.
http://elizabethbarton.blogspot.com
Natalya Khorover who I've also taken many classes from. Recent classes would include the creation of a plastic piece of cement works which is shown in the interview as well as my Boston collage piece that I am currently working on.
Here's a link to her website.
https://www.artbynatalya.com
Denise Labadie who I was supposed to take a class from last year at the quilting by the lake venue until Covid hit. She makes wonderful quilts of old stone ruins.
Here's her website.
https://www.labadiefiberart.com
Ian Barry who makes astounding quilts from jeans. I saw his work at the Paducah quilt show in 2018. Here's a link to his work.
https://www.ianberry.org
I am away for a few days so I was able to take a much needed break from the Boston quilt!
Thanks for reading.
Linking to Nina-Marie
http://ninamariesayre.blogspot.com
Chris
Posted by Chris at 6:48 AM 2 comments:

Chris
I have been doing art in one form or another since I was a child. I remember drawing a sketch of a woman that I called " A woman going crazy" when I was really young and one of our artistic neighbors saying that I had some talent for art. Boy how I wish I had that sketch now! When I was in 8th through 10th grades I attended free Saturday art classes at Carnegie Museum in Pittsburgh. What a great opportunity that was. For the last 35 years quilting has become my obsession. The need to do something creative is what drives me in my quilting.

"Nothing is Ever as it Seems" 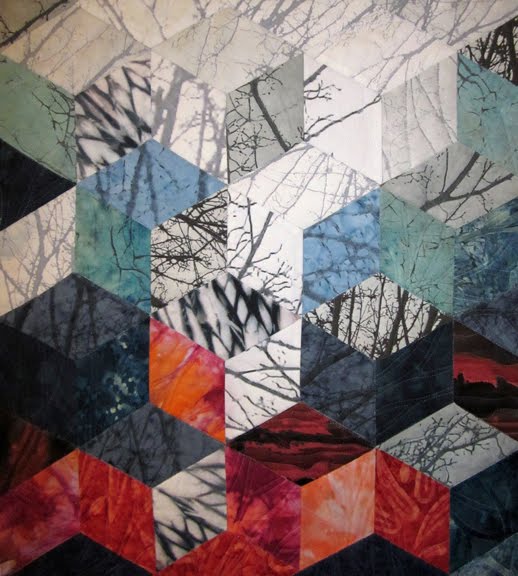 Quilt on the header made in Elizabeth Barton's master class 2014. Click on the photo to read more about it. Currently owned by my daugher, Kelsey.